A common complaint with Marine LED Lighting is their labeled lifespan.  LEDs are known for a much greater extended lifetime compared to their predecessors.  Halogen, Incandescent, Fluorescent, Xenon, High Pressure Sodium have all been replaced by LED.  The marine industry was quick to latch on and maximize the use of LED Lighting.  Most led lighting manufacturers easily tout thirty to fifty thousand hours.

There are a plethora of reasons for LED’s not hitting their labeled lifetime span.  In a lab environment the LED’s are generally tested in a bench environment without extreme heat.  The pioneer days of Marine LED started ramping up around the early 2000’s.  Many different Marine Electronics companies were unsuspecting guinea pigs for many different Marine LED manufacturers. Through many sea trials and tribulations Marine LED has finally arrived as a reliable technology.  Many Marine LED Underwater Lights were hitting the twenty thousand mark easily.  This was ten fold compared to their brethren but still not matching manufactured label lifespan.  Getting twenty thousand hours out of a light source is still remarkable.

It’s not as though the Marine LED lights would just tank at around twenty thousands hours.  Other issues would come into play as far as Marine LED brightness (light output) and Marine LED colors (efficiency).  Marine LEDs thrive when given a constant voltage and the marine industry is known for their wide range of voltages.  If boat manufacturers could take the same approach as NMEA (National Marine Electronics Association).  Marine LEDs would not have some of these kinks for different operating platforms.  Not pointing fingers here but the inability of many different boat builders to get on the same page is the single largest culprit.  Every part of your marine vessel is vital to returning home safely.  Of course your engines are paramount to running but Marine Electronics are delicate and require special care.  Notice how every Marine Electronic device has a cover.  Proper Marine Electronics Installation requires a level of sophistication mixed with craftsmanship.  Let MEI assist you with any of your Marine LED lighting needs. 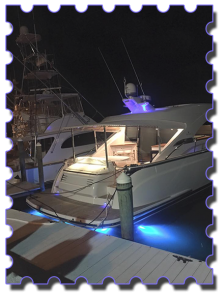 Marine LED’s can get complicated depending on certain scenarios.  As mentioned earlier, Marine LEDs enjoy a constant voltage.  A common reason for the decreased lifespan of Marine LED lights are spikes in voltage or fluctuations.  Spikes commonly occur from mother nature (lightning strikes).  Other spikes are caused by user error, a mishap with your battery switch or ship to shore cord.  Fluctuations regularly happen at the dock, especially when visiting ports abroad.  Most sportfish yachts traverse many different oceans and are subject to varying voltages at marinas.  Thus causing more problems for Marine LED longevity and efficiency.  Center Console boats generally run the lower 12v to 24 volt platform and their modus operandi makes for optimum Marine LED life span.  Marine Generators are another detriment for a Marine LED Lights usefulness.  Not properly warming up your generator before switching from ship to shore can cause issues with fluctuations in voltage.  Remembering that your generator is an engine and that it needs to be running smoothly before transfer of power supply.  This will increase your Marine LED longevity and efficiency.

I have worked with MEI on several jobs and they are up-to-date on all the latest equipment. They really know their stuff!